I bought this shawl years ago at a swap meet and rediscovered it the other day while rummaging through my stash of woolies.

It’s mostly wool, with some silk and rayon, and metallic pattern threads.

It took up the leaf colors a bit differently than what I had expected. Perhaps it was the metallic threads, or whatever it had been washed in before I bought it.

A weaver friend, Elizabeth Hill, made the most wonderful skirt out of handwoven fabric. 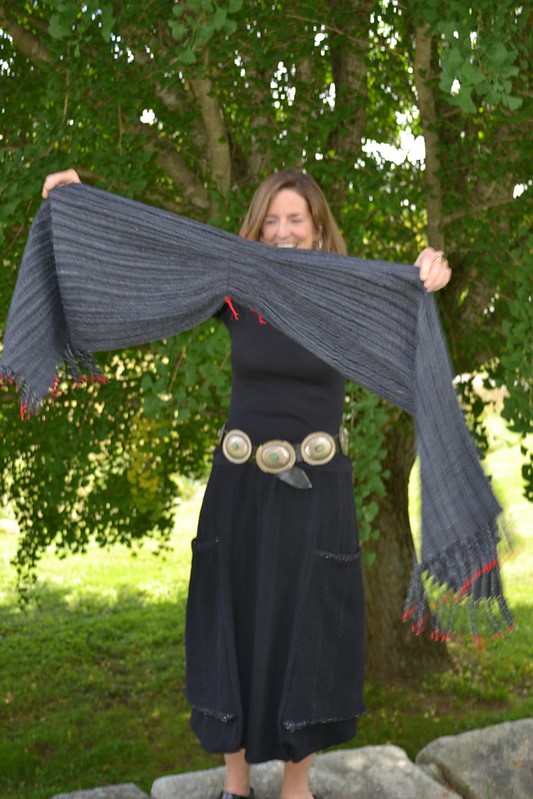 I was looking at it and thought…. that skirt would look nice out of eco printed fabric!! About the same time that I was thinking that, she wrote to me and said, “I think that this skirt would look wonderful out of some of your eco print fabric!”

So I have begun the process. Today I printed some of the sea dipped wool that I had brought back from Portland. I tore the fabric into rough pieces slightly bigger than the pattern pieces.

I had thought to make the large pocket sections with just silver dollar eucalyptus, as a nice complimenting contrast. But I added some cotinus leaves to them, and regret it a bit. Ah well.

Here are a few close up details…….

Will let the fabric set until my next weekend…. and then will begin the task of learning how to use my new sewing machine. Yes, I know, I’ve had the machine since May….. you would think that I would’ve learned how to use it by now! 😀

While I am writing this I have a loaf of ‘paleo’ fruit bread baking…. it smells so yummy!!

I’m closing up shop after 6 and a half years…… and I’m quite happy about it!

Time to reconnect with my old self. Do more hiking, more photography, more gardening…… more experimenting with my weaving, dyeing and eco printing. Less stress, more fun. My new motto! 🙂

I’ll still be on Flickr, even if I am not too fond of their new format, and here. Hopefully here more than I have been in the past….. there will be more interesting things to talk about/share.

I had a nice vacation…… for the most part.

The first three days were wonderful! We went to Cannon Beach and had a long walk…… ended with dipping fabric into the ocean (it’s becoming a new tradition!). I had brought some silk fabric with me, and bought some odd lengths of wool fabric in Portland…… they were all baptized successfully, although I had to dash after some silk that the sea tried to seize! 🙂 I’m sure I was a funny sight!

The nest day Emily and I went berry picking at a local organic farm. The thornless blackberries weren’t very yummy. But the strawberries were heavenly! I also purchased some local peaches which were amazing, and some blueberries that had been frozen from the month before.

The next day I spent walking, looking around the local area for baby shower party items, unsuccessfully 😦 The bakery that I had found via google, which sold organic gluten free cupcakes, had closed the week prior to my arrival! That was sad. And there were no local places to buy balloons and streamers. Ah well. It was a very nice long walk out in the beautiful city!

The next day my trip went downhill. I managed to misstep going down the stairs to the basement (where I was sleeping) and smashed a three inch gash in my heel! Only I could be so klutzy!! I ended up having to go to urgent care where they stitched it up (12 stitches!!). I was told to stay off of my feet for a few days (sure…. I had a baby shower to throw!).

The baby shower actually went well! Yes, I didn’t do as ordered and stay off of my feet. Here’s a photo of Emily and her baby belly…

I had wanted to get leaves while I was up there. So I went walking one day, which was a mistake on one hand….. my heel was screaming at me by the time I returned ‘home’…… but I did get a few. There were some maple trees that I remembered from my trip last year that made glorious purply prints. I went out looking for those and on  the way back to the house I saw two cotinus trees with the biggest leaves I have ever seen! I wanted to pick some, but couldn’t build up the nerve to ‘steal’ them from somebody’s yard. Then I noticed a branch in the gutter!!! Yay! I grabbed it up and carried it home. I also got some nice walnut leaves from Cooper’s front yard (English walnut leaves…. rounder than the black walnut leaves I can get here).

Last week I eco printed with some of the leaves.

This scarf has some of the cotinus leaves, along with eucalyptus.

This up-cycled silk blouse has the cotinus and walnut leaves, plus a few eucalyptus leaves. Oh, and the sleeves were left unbundled to take up the onion color of the dyebath.

And this scarf was done with a mixture of leaves mainly from my yard…..